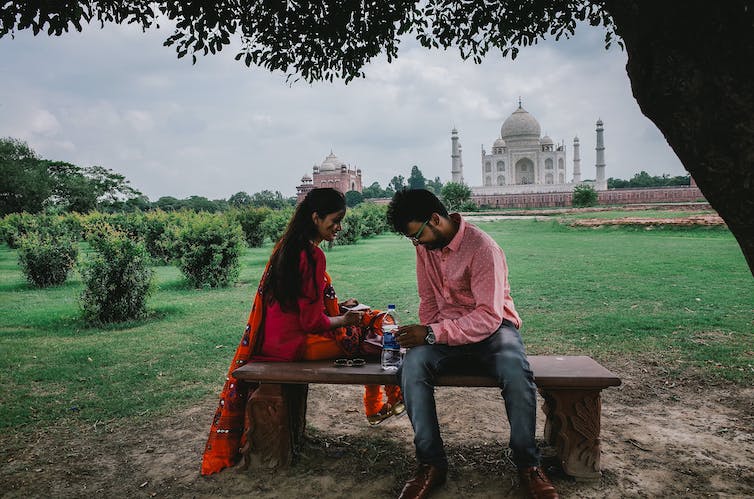 No emotion, surely, is as cherished and sought after as love. Yet on occasions such as Valentine’s day, we can often be misled into thinking that it consists solely in the swooning, star-crossed romance of falling deeply “in love”. But on reflection, love is far more complex. Indeed, arguably no word covers a wider range of feelings and experiences than love.

So how can we ever define what love really is? In my new study, published in the Journal for the Theory of Social Analysis, I’ve made a start by searching the world’s languages for words relating to love that don’t exist in English.

Most of us use the word love fairly liberally. I use it for the deep ardour, care and respect I have for my wife. But I will also call upon it to describe the unshakeable bonds of kinship and history I share with my family, and the connections and allegiances I have with close friends. I’ll even use it in relation to our cheeky dog Daisy, the music of Tom Waits, Sunday morning lie ins and many other things.

Clearly, whatever love is, it spans a great deal of emotional and experiential territory. Needless to say, I’m not the first to notice this. For instance, in the 1970s, the psychologist John Lee identified six different “styles” of love. He did so by studying other languages, in particular the classical lexicons of Greek and Latin, which boast a wealth of precise words describing specific kinds of love.

This analysis seems like a good start, but an incomplete one. After all, it mostly just concerns romantic partnerships, and doesn’t account for many of the feelings that fall within the ambit of love.

I decided to expand on this work as part of a broader lexicographic project to collect so-called “untranslatable” words that pertain to well-being, a work-in-progress which currently features nearly 1,000 words. Such words can reveal phenomena which have been overlooked or under-appreciated in one’s own culture, as I explore in two forthcoming books (a general interest exploration of key words, and an academic analysis of the lexicography). In the case of love, then, untranslatable words help us understand the bountiful variety of emotions and bonds that are in English subsumed within the one word “love”.

My enquiry yielded hundreds of words from around 50 languages (which of course leaves many languages still to be explored). I analysed these thematically, grouping the words into 14 distinct “flavours” of love. Some languages were particularly prolific in their lexical dexterity, especially Greek, which contributed the most words by far.

As such, in a spirit of poetic consistency, I gave each flavour a relevant Greek label. I call these “flavours” to avoid implying that relationships can be exclusively pigeonholed as constituting just one form. A romantic partnership, say, might blend several flavours together, generating a unique “taste” which might subtly change over time.

So, what are these flavours? The first three do not concern people at all. They refer to people’s fondness and passion for certain activities (meraki), places (chōros) and objects (eros). Note that this usage of eros reflects its deployment in classical Greece, where it was often used in the context of aesthetic appreciation rather than romance. Indeed, like love itself, all these words can be used in varied and changing ways.

Each of these flavours is a “compound” of related terms from various languages. For instance, the connection to place denoted by chōros is reflected in concepts such as “turangawaewae”, “cynefin” and “querencia” – from Māori, Welsh and Spanish respectively – which all pertain in some way to the sentiment of having a “place to stand” on this Earth, somewhere secure that we can call home.

When it comes to love between people, the first three are the non-romantic forms of care, affection and loyalty we extend towards family (storgē), friends (philia), and ourselves (philautia). Then, embracing romance, Lee’s notions of pragma, mania, and ludus are joined by the passionate desire of “epithymia”, and the star-crossed destiny of “anánkē”.

Again, these labels all bring together related terms from diverse languages. For instance, the spirit of anánkē is found in terms like the Japanese “koi no yokan”, which roughly means “premonition of love”, capturing the feeling on first meeting someone that falling in love will be inevitable. And likewise the Chinese term “yuán fèn” can be interpreted as a binding force of irresistible destiny.

Finally, there are three forms of selfless, “transcendent” love, in which one’s own needs and concerns are relatively diminished. These are the compassion of agápē, ephemeral sparks of “participatory consciousness”, such as when we are emotionally swept up within a group dynamic (koinonia), and the kind of reverential devotion that religious believers might hold towards a deity (sebomai).

Clearly, there any many ways we can love and be loved. You and your life partner might well experience feelings of epithymia, pragma, or anánkē, but may also – or alternatively, instead – be blessed with moments of storgē, agápē and koinonia. Likewise, a deep friendship could similarly be suffused with some mixture of flavours such as pragma, storgē, agápē and anánkē, in which we feel a profound and fated bond of lifelong connection.

Moreover, this list is merely preliminary, with other flavours potentially yet to be acknowledged. So hopefully we can be reassured that even if we are not romantically head-over-heels “in love” – in that archetypal Hollywood fashion – our lives may still be graced by love in some precious and uplifting way.

This article was originally published on The Conversation. Read the original article.

← Conversation #14 — Julian Birkinshaw, Professor, London Business School
When is a failure not a failure? Why we need to stop using the f-word →

Want to discuss a business challenge, plan a communications strategy or talk through some research? I love to chat, so drop me a line and I’ll get back to you as soon as possible.
Yes, I'd like to talk
This site uses cookies. By continuing to use this site, you are agreeing to the use of cookies as set out in our Terms and Conditions